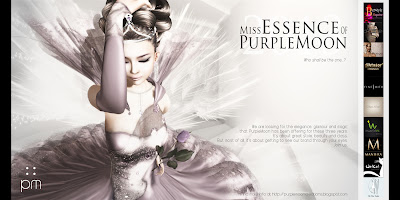 Our pool is now open to receive the submissions of the 2nd phase of our "Essence of PurpleMoon Contest". The first six semi finalists from the first phase will be announce tomorrow July 30th, 2012!

[1] Join PurpleMoon Creations in world group.
[2] Join "the ♔The Essence of PurpleMoon™♔" group in Flickr: www.flickr.com/groups/essenceofpurplemoon/
[3] The photo can be taken by yourself or somebody else (Please credit the photographer in the description). You have to wear an outfit from PurpleMoon or a mix&match of PurpleMoon designs but no group or hunt gifts are allowed.
[4] The photo must be 1024x1024 pixels or higher but always in 1.1 ratio and must be submitted to the Flickr group. (No pictures sent inworld will be accepted)
[5] You are allowed to submit up to two (2) pictures. One face shot and one full body shot. Rename the pictures "The Essence of PurpleMoon" -"Your Name".
[6] No logos, signs or names are allowed on the photographs.
[7] We reserve the right to remove from the pool any images that don't follow these rules.
[8] By posting your pictures in the group you are giving PurpleMoon Creations all the rights to use those pictures for promotion, advertising, etc.
[9] Each month, six monthly winners will be chosen to compete in the Essence of PurpleMoon semi-finals in mid-October. This will be an in-house styling show and personal interviews. Ten finalists will be chosen at this event.
[10] The ten finalists will compete in the Essence of PurpleMoon finals in November. A panel of judges will select the top three winners. More details about what to prepare for the final will be given to the finalists.
[11] Winners will be chosen by a panel of judges to be announced.

Special thanks to our sponsors who enrich our contest with fabulous prizes: